Since we arrived in Galápagos, we’ve had the time to do two excursions around the islands, one land-based and one in the water. We hope to do many more while here, but the boat is demanding a little attention at the moment, so today will be reserved for fixing the impeller on the generator, fixing the starboard water pump, doing laundry, and picking up final provisions for the Pacific crossing. We’re also hoping to make it to the Charles Darwin Research Station on Santa Cruz and visit Las Grietas, a lava fissure that has formed some interesting geography and a swimming hole sometime tomorrow.

The land-based tour was a few days ago on San Cristobal, and it was a great into to Galápagos geography and wildlife. We had our taxi driver (all taxis here are white pickup trucks with a Galapagos Land Transport Cooperative seal on the side) take us on a route around the island that included a visit to El Progreso, a small town on top of a hill outside town that originated as a hacienda belonging to sugar baron Manuel Cobos. We drove around the town and saw remains of sugar mill equipment, some nice typical restaurants, and the fields where people from Puerto Moreno make their way into the country each Sunday for an afternoon of family-friendly soccer and volleyball. 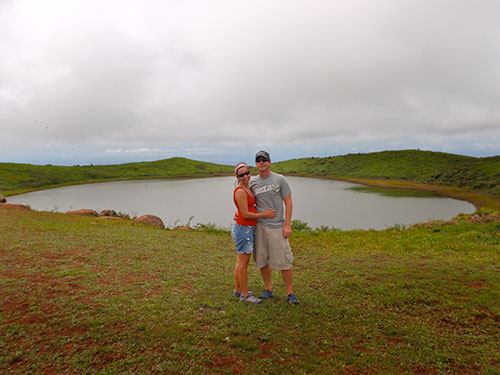 Lara and Jason at El Junco

On the way, we passed the diesel plant that makes 50% of San Cristobal’s power. The other half comes from three large windmills set atop the island’s tallest peak, adjacent to “El Junco,” a freshwater volcanic crater lake that we visited later in the tour. El Junco is a favorite spot for frigate birds and other sea birds to land and rinse the salt out for their feathers. Frigates don’t land so much though, because they don’t have oil in their feathers and therefore don’t float well.

Other stops included stops at Playa China, dubbed “Sand Fly Beach” by our party, La Lobería, where sea lions and marina iguanas share the volcanic-rock seashore to warm and dry themselves in the sun daily, and Cerro Colorado, a Galápagos tortoise breeding center. The tortoises have been so affected by non-native species, like cats and rats, and the encroachment, however minor, of human development, that these breeding centers have become necessary to insure the perpetuation of the species. Tortoises are raised in small cages with fine wire mesh surrounding all sides until they are about 3 years old. Then they are transferred to a pen that mimics the natural environment, only limits their range, until they are about 5, large enough to defend themselves. They are the released into the surrounding Cerro Colorado, which is filled with manchineel trees, toxic to us abut a tortoise’s favorite snack, and other scrubby low-growing bush. The preserve at Cerro Colorado was once part of the tortoise’s natural environment, but the population there has become extinct, so tortoises have been relocated here as part of the project.

The second tour we did was in Santa Cruz, and it included a dive trip to Seymore Norte and Mosquera, two spots on the northern side of the island. Visibility was very low because the Humboldt Current has kicked in hard over the past few weeks, but it was clear there is abundant life and nutrients in the water here. What we did see included eagle rays, white tip and Galápagos sharks, sea turtles, red-throated magnificent frigate birds nesting on the hillsides and sea lions. We had a short break during lunch where we had a moment to snorkel in the shallows with a pack of sea lions, and it yielded some of the most in-water fun we’ve had so far. One even came so close to me while I held out my camera, that he tickled my hands with his whiskers…then he made a move to bite the lens. Cheeky little guy. 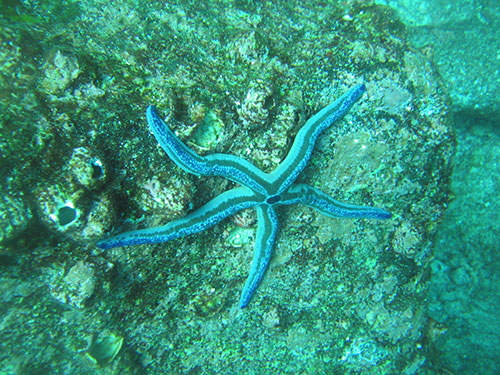 2 Responses to Sightseeing in Galápagos