Detour to Nuku Hiva, then on to Manihi, Tuamotus

So in the interest of completing some important business over the internet, we diverted to Nuku Hiva instead of Hiva Oa. Nuku Hiva is the Marquesas’ most populated island, and houses not only the best grocery selection in the Marquesas (canned foie, canned camembert, dried noodles, Orangina), but the 3rd tallest waterfall in the world, called Vaipo.

We did a wander around town on day 1 and found a beautiful restored Catholic church, made of local stone and carved wood. The sanctuary is open air, and the grounds are teeming with roosters, flowers and crotons. We also restocked on a couple of key grocery items, such as bread, and we checked out the tikis and stone carvings brought down from historic sites around the island to be displayed in the town square. One is of a warrior holding a head in his grip by its hair. There was a market early Saturday morning, and Karen and I picked up pamplemousse (or pomelos), some tomatoes, zucchini, oranges, and banana, and I picked up some mystery meat on a stick (2 kinds), to bring back to the boat for Jason’s and my breakfast. On further discovery the sticks, or brochettes, were quite good. One was shrimp covered in a sweet dumpling dough with herbs, and the other consisted of a basic fried spring roll, full of cellophane noodles, herbs, and chicken strips. 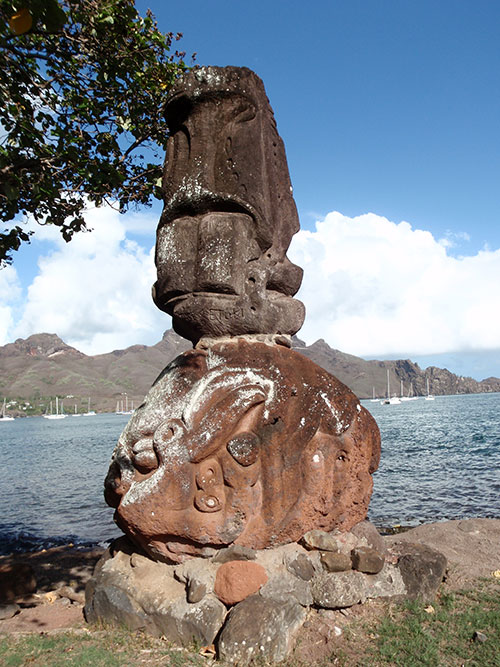 Sunday morning we made our way west along the coast to spend the day at Daniel’s Bay, the home of the path that leads to the famous waterfall. We spent the day on the beach playing hackey sack and frisbee, reading, and making friends with our neighbors (local and boat). I even got to go wake boarding on a kite board behind a dinghy. NOTE TO OTHERS: Kite boards feel way faster. 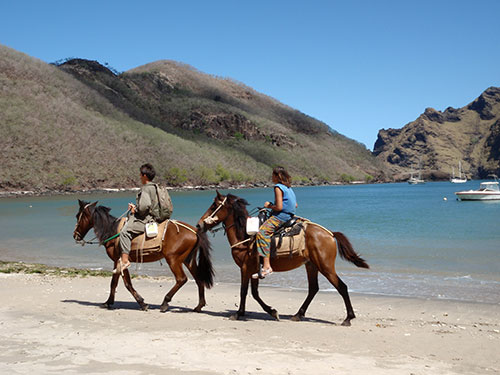 While we were on the beach, two kids on horseback ambled by, apparently on their way to visit Tai’i, the current resident of the house on the beach. It turns out that in the Marquesas, most all of the land is communally owned by a family, and it is left to be decided among the family who may live where and who may harvest what. This leads to some odd politics at times, such as the way that Tai’i makes an effort to take pride in his property, but not to make it too nice, for fear of being challenged by a cousin or other someone who may also want a right to establish himself in Tai’i’s back yard. Either way however, I have yet to see a Marquesas yard or hedge, garden or orchard that wasn’t at the peak of maintenance, replete with fruits of all kinds, and the requisite strapping brown horse and dogs. Tai’i says he uses his horse to carry bags of coconut down to his drying racks before the supply and oil ship, the Aranui, comes around to collect copra for processing into coconut oil in Tahiti each month. The dogs, however, are for pig hunting.

We were pretty tired and went back to the boat to make some pan fried mahi bites and fresh fruit salad and hit the hay, but several other boats stayed around the beach and ended up making a bonfire and cooking up a number of big land crabs they found along the bay for dinner. We were sorry to have missed it once we heard about it, but we did need the rest. 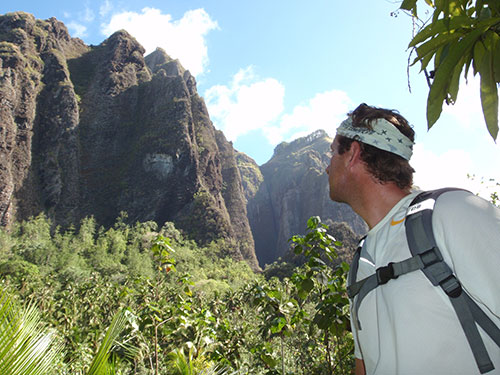 Jason looking at the cliffs

That's Lara in the meadow

Today we made the 2 hr hike to Vaipo, through changing landscapes and flora as we ascended the canyon along the streams leading to the falls. It was cool and shady, and the views were dramatic–one of the most breathtaking walks of my life. It started with botanical gardens at the bottom interspersed with homes, then wet grassy stream beds, then rocky faces with banyans, almost rainforest-like, the rapids along the valley floors, then shear cliffs surrounding  lush meadow, until we finally reached the pools at the base of the falls. The fall itself was mostly dry since Nuku Hiva is in it’s 4th month without rain, but the site was still spectacular.

On the way back, we negotiated to buy some fruit from some of the folks living along the beach in the bay, and Jason and I brought the dinghy over to load up on treats for the next couple of weeks. We shared a glass of fresh lemonade with Maria and Mai’i and watched their twin kittens lap coconut cream off of husks side by side with a whole crew of ducklings.

Tomorrow we hope to start our 3 day journey to the Tuamotus island chain, aiming for Manihi atoll.

NOTE: Internet here is too slow for photos, so I’ll try posting in Manihi in  few days.

4 Responses to Detour to Nuku Hiva, then on to Manihi, Tuamotus