It has been years since I have had the “dive bug” the way I did when I first started diving some 20-odd years ago. It used to be that I couldn’t get enough diving. It was dive, dive, dive all the time. Then, after years of diving the same waters (Florida and the Caribbean), I grew tired of the same thing over and over. This led me to more technical types of diving, which satisfied my need for change for a while. Eventually the same thing happened. I again grew tired of the same old and mostly stopped thinking about diving. Occasionally I would find myself in some far-away place, and I’d go for a dive or two.

I suppose this counts as finding myself in some far-away place, but I’m really feeling the draw to dive again. In all my years of diving, my only Pacific Ocean diving was off the coast of California, and it was cold and inhospitable (to put it mildly). Down here in the South Pacific, it’s a whole different world. The waters are warm and tropical with a clarity that’s unmatched anywhere I’ve been in the world. The marine life is vastly different from Florida and the Caribbean. There is so much to see.

The majority of the diving we’ve done has been on the passes of the atolls. This is the cut where water can flow in and out of the lagoons with the tides, so the current tends to be strong. Because of that, we do drift dives, where someone remains in the dive boat and follows the group. Thanks to the current, the abundance and diversity of fish is truly amazing. 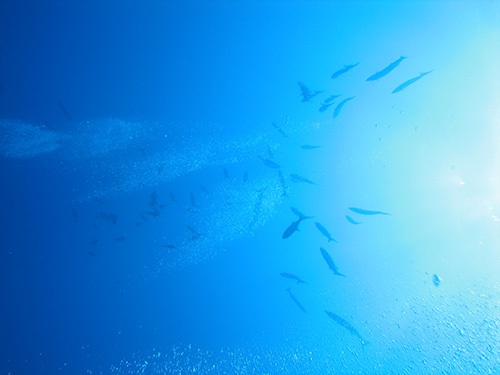 At deeper depths, 100′ to 160’+ (yes they do some pretty deep diving here in the atolls), I’ve seen tuna in the 500-pound range, napoleon wrasses between 200 – 400 pounds and giant harlequin triggerfish. The middle depths (50′ – 100′) are full of jack, snapper, grouper, barracuda, huge parrotfish, large wrasses of every color imaginable, and the list goes on. In the shallows, 40′ or less (also accessible while snorkeling), the coral begins to flourish and there are literally thousands of small reef fish in every color and variety imaginable. Occasionally, I’ve been surprised by some more exotic findings like lionfish and clowns buried in anemones, but I have yet to see my all-time favorite fish, the clown trigger, which makes its home in these waters. On almost every dive there are sharks of one variety or another. The most common so far have been the black-tipped reef sharks, but I have seen grey reef sharks, white-tipped reef sharks, and a few pelagic varieties. It’s mating time in Rangiroa and we had to opportunity to see grey reef sharks gathering for mating in the current of the pass. In Rangiroa I even saw dolphin (the Flipper kind) and sharks on the same dive! 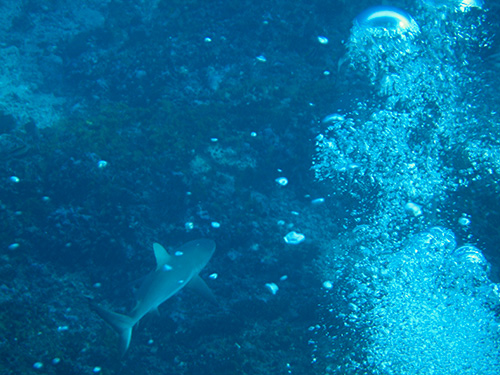