After a night of 30 knot winds, we awoke to a drizzly morning in Moorea. The Puddle Jump folks had a whole day of sports and Polynesian activities scheduled for us, so we made our way to shore in the rain and paired up with another boat to make a team. We did outrigger canoe races, a fruit carrying race (2 full banana stalks strapped onto a bamboo pole like barbell), and a tug of war. Jason took on the banana barbells and out ran every other man who tried today. I was so proud! He ended up winning a heavy carved wood sculpture shaped like Moorea and etched with the event logo. We really wanted the canoe paddle, but the canoe race winners got that, so another pickle dish will do. It’s quite heavy, so we’ll have to figure out how to get it home. 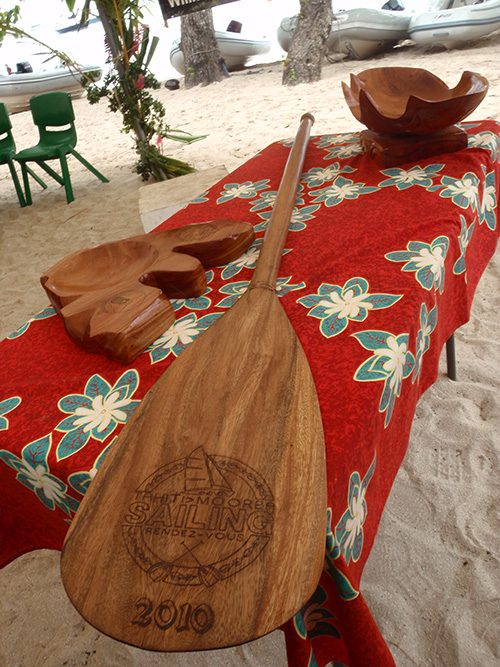 Jason won the trophy on the far left. 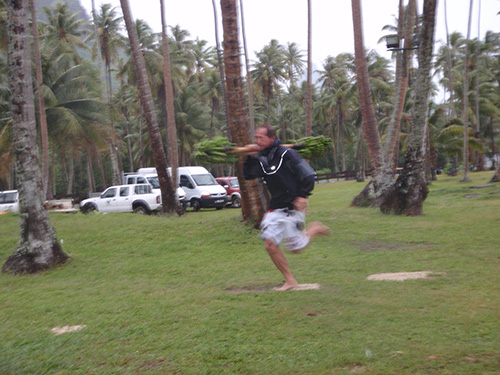 Jason runs with the bananas

In the canoe race, a few teams managed to flip their outrigger canoes, which was outright hilarious. We also watched palm thatching demonstrations and learned how to husk and process coconuts. 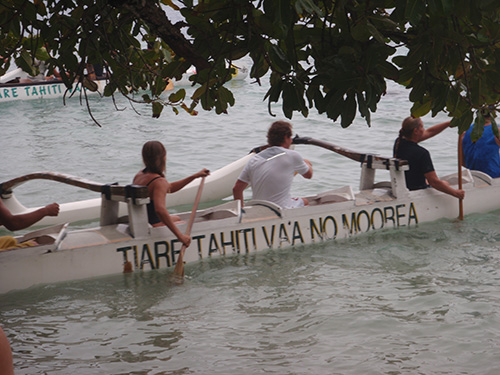 Lara, Jason and Karen paddling off for the canoe race

Lunch was a traditional Tahitian feast with food cooked in an underground oven and eaten by hand. We had breadfruit, pumpkin cured in coconut milk, taro root, and fafaru, a raw Tahitian fish marinated in fermented seawater and topped with fermented coconut milk. It’s so stinky it actually made the Fodor’s list for The World’s Stinkiest Foods! One of the Tahitian ambassadors at the party likened it to the Tahitian’s answer for cheese. The meal wasn’t a match for the deliciousness of last night’s wood-barbecued chicken, fish, lamb and beef with Tahitian fried rice, pink potato salad and green salad, but it certainly felt more local.

The rain was still pouring down when we ended the festivities, but it didn’t seem to have dampened the fun. All the participating sailors were given a polished mother of pearl oyster carved with the event logo, and we were treated with the best dance performance of the weekend, this time featuring fire dancers.

2 Responses to Jason Wins a Prize!