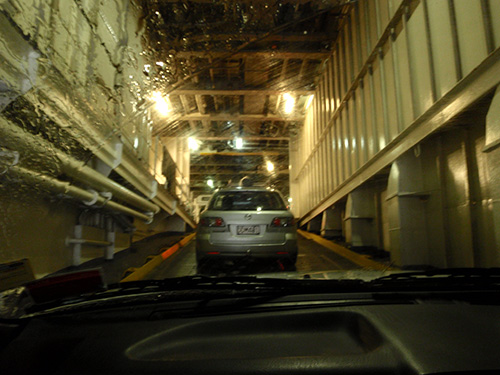 Boarding the ferry in rainy Wellington 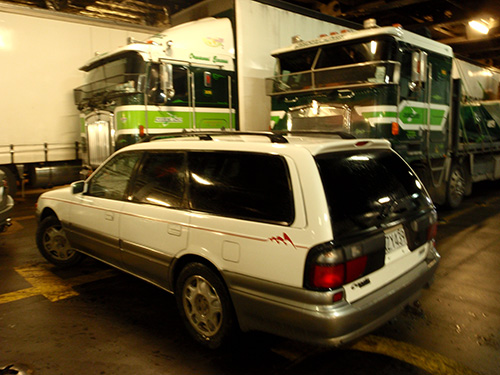 Myrtle all tucked away

We crossed the famous Cook Strait yesterday, and while the water there is reputed to be rough and rolly, we had a pretty smooth ride. The morning was supposed to be clear, becoming cloudy and rainy toward the afternoon, but as we’ve found the pattern to be in New Zealand, it’s almost always uglier than the “experts” say it will be. While the seas were calm, the skies were gray and dreary, and visibility was quite low. Myrtle (that’s the station wagon, folks) was cosily tucked away on the lower decks, parked athwartships in the hold, with her parking brake on hard. Everyone else was parked fore and aft, and the boat tends to rock side to side, so if anyone was going to wreak havoc, it was her. It was pretty blustery, so we hung inside for most of the ride, taking a few photos as we entered the Marlborough Sounds toward the end. There were snowcapped mountains visible in the distance, and a pod of dusky dolphins passed alongside as we closed in on Picton.

Mountains in the distance 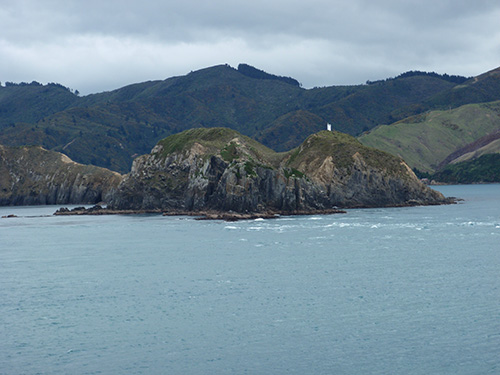 After landing in Picton, we consulted our trusty map and opted for the scenic route west, along Queen Charlotte Drive, which butts up against on of one of New Zealand’s most popular walking tracks, the Queen Charlotte Track. The drive is not nearly as scenic as the walk, we’re sure, but it was still beautiful. It’s still pretty cold out, and we’re not quite sure we feel ready for 3-5 days in the wilderness by pack with our current gear complement. 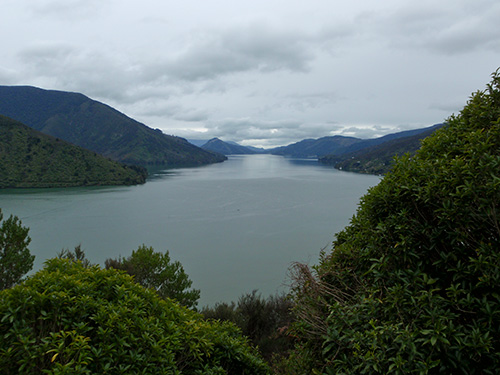 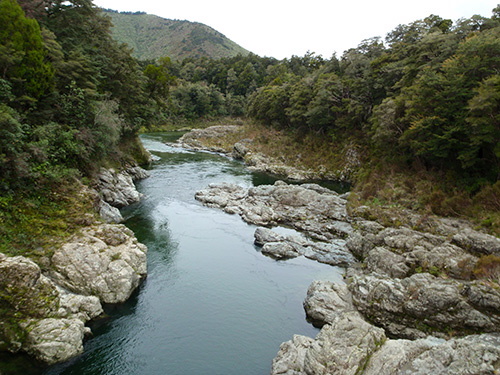 River crossing on the way to Nelson 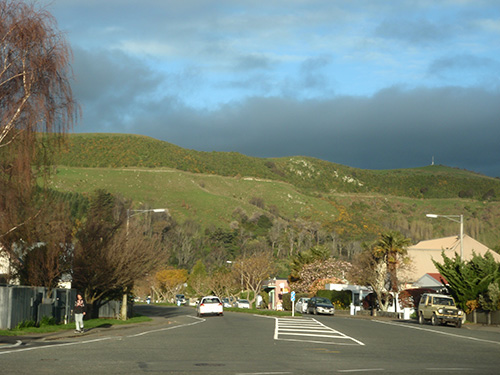 We made our way along the northern roads on the South Island to Nelson, a truly stunning large town/small city on the coast about an hour south of Abel Tasman National Park. The town is rich in the arts, has a film fest going on right now, and it moving into the season for the arts festival. There are glassblowers, carvers and artists of all kinds living in the town, which is sliced in two by the Maitai river, winding lazily through town and bordered on both sides by parklands and walking paths. 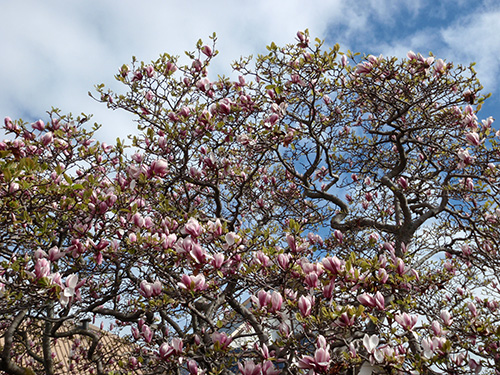 I call these "tulip trees"

Our hostel is positively the nicest one we’ve seen so far, complete with organic herb and fruit garden, a top-notch kitchen, spic and span rooms and a great living room complete with a fireplace, couches, games and books. They serve chocolate “pudding” and ice cream every night at 8 p.m., and breakfast is free in the winter months. The pudding is more like a chocolate molten lava cake, but you know those crazy Brits, they use weird words for everything. The place is called Tasman Bay Backpackers, and pricing is definitely steeper than anywhere we’ve been staying so far, but the atmosphere makes it worth it. We can book any activities we like through the hostel, and they even rent camping gear for folks going to hike the Abel Tasman Coast Track for a few days. Jason found a hang gliding brochure that caught his eye here, so we’re going to see if we can arrange it while we’re in the area, weather depending. 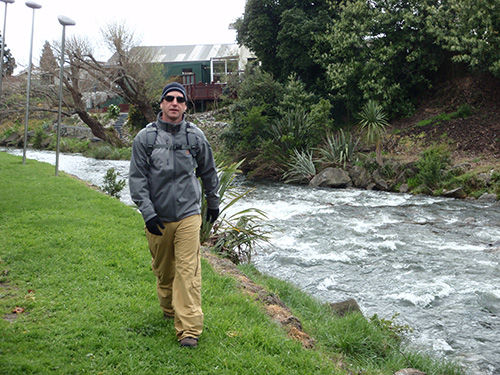 Along the Maitai River 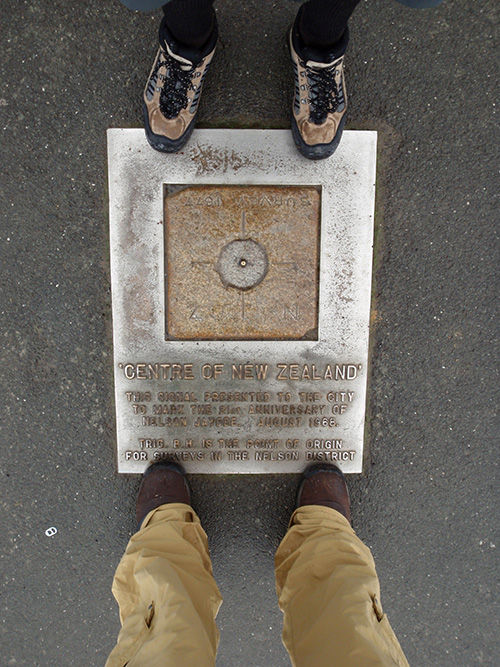 The "Centre of New Zealand" 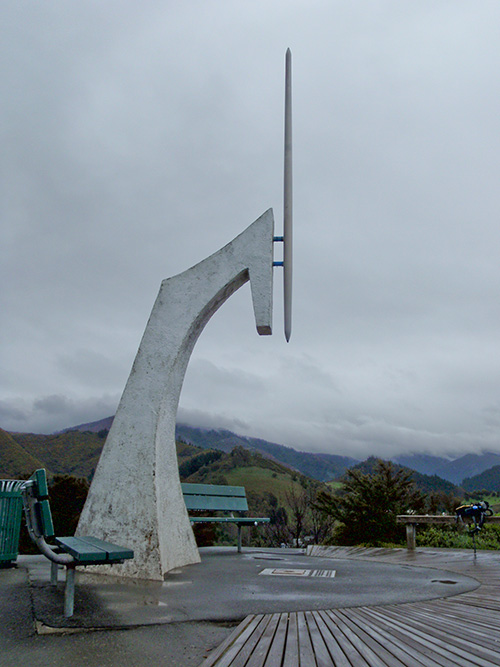 The "Centre of New Zealand"

Nelson is surrounded by mountains, and we made our way up one of the smaller ones close to town today, at the top of which is located the exact center of New Zealand. Don’t ask us how they know it’s the center, we just tell it like we hear it. The marker was set in the 1880s, so it’s very likely that with all of the volcanic and seismic activity here, the actual center might have moved a bit. We could look out over the whole valley where the town is located, and  into the Tasman Sea, where local boats host their Wednesday night racing series. It poured down rain most of the day, and when it wasn’t raining it was drizzling, so we stayed pretty bundled up on our 2-hour walk from the Maitai River in town to the peak and back down to Founders Heritage Park, where we sat down for a game of checkers and a $6 beer tasting of their Founders Organic Brewery beers. Founders is in it’s 6th generation of family brewing, and their darker ales really hit the spot after a cold wet day outside. Jason begged to differ, however. He liked the blonder beers. 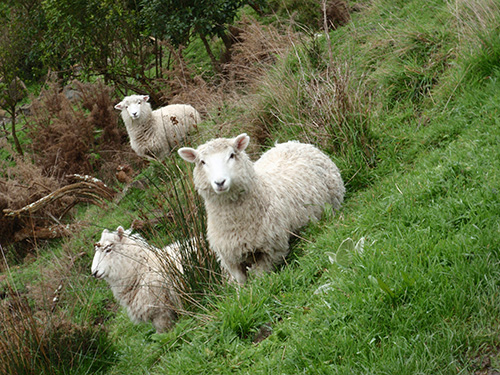 Sheep along the hike 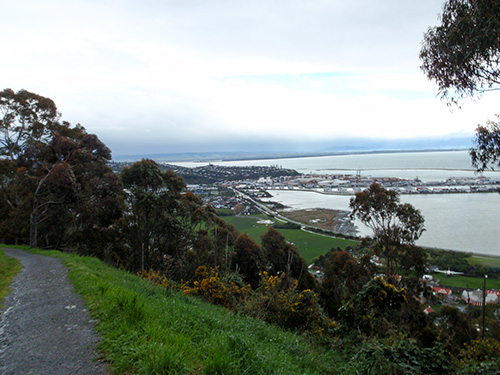 View of Nelson from the hike

We met some of our first fellow American travelers at Founders and hitched a ride back to our hostel with them, for a dinner of pork chops, sauteed leeks and apples. The oven got turned of while the pudding baked tonight, so in a first-ever event of tragic proportions, Tasman Bay was without quality pudding. Backpackers make the best of their circumstances though, so we turned it into chocolate sundae night, and spooned the runny half-baked batter onto our ice cream instead.

We head out for a week-long farm stay in Motueka tomorrow, where we’ll stay at a cottage on a couple’s family farm property and experience what it’s like to run the place. They have a trout stream on property where we can fish, and they have horses they say need exercise, so we’ll probably be into some of that while we’re there. We’ll also probably take a day out to do a visit to Abel Tasman Park, but we haven’t decided whether we’ll simply focus on walking or we’ll jump on some water taxis or kayaks to reach the more remote areas of the trail.

The morning holds a farmer’s market in store for us, plus 1-hr jaunt through Nelson wine country as we work our way toward the farm stay. We’re not sure whether we’ll have internet while we’re out there, so if we’re out of touch, don’t worry about us.