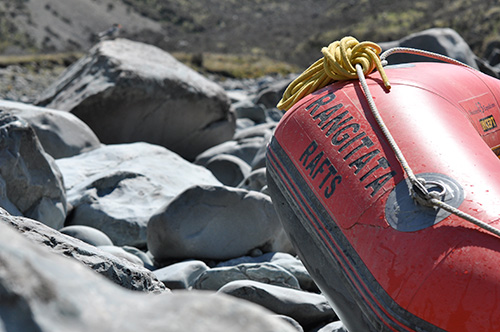 Today was one of my favorite days in New Zealand and my first ever white water rafting trip. A van picked Lara and I up at 8:00 a.m. and drove us 2 hours to a section of the Rangitata River situated at the base of the northern end of the Southern Alps. The rafting company, Rangitata Rafts, has exclusive access to raft this section of the Rangitata, thanks to family ownership of around 30 km of adjoining land needed to access entry and exit points on the river. We were told the family has owned the enormous cattle and sheep station for more than a hundred years and the land is now worth an estimated $190 million NZ. It was a typical New Zealand scenic drive in with lots of farmland and snowcapped mountains in the background. Upon arrival we were greeted by the owner Tussock and then served a quick lunch on the deck before getting geared up and heading for the river.

The Rangitata is a glacially fed river, and as we were being issued our rafting gear, the guide told us that 8 hours before we arrived, the water we were rafting on was frozen high in the mountains. Each of us rafters were given a thermal top, a fleece, 5mm wetsuit, neoprene boots, spray jacket, life vest, and a helmet. It all seemed a bit cumbersome, but hearing how cold the water is, nobody questioned it. As we all suited up, one of the guides gave us a rundown on the river and the rapids we would be facing. Worldwide, rapids are graded from grades 1 – 6, with grade 5 being the highest grade legally raftable in New Zealand. The guide explained that on our trip today, we would be facing rapids from grade 1 right up to grade 5 and that the first part of the trip would serve as training for the big grade 5s near the end. After the intro and once everyone was suited up, we hopped in a van with the rafts in tow and headed down to the river. 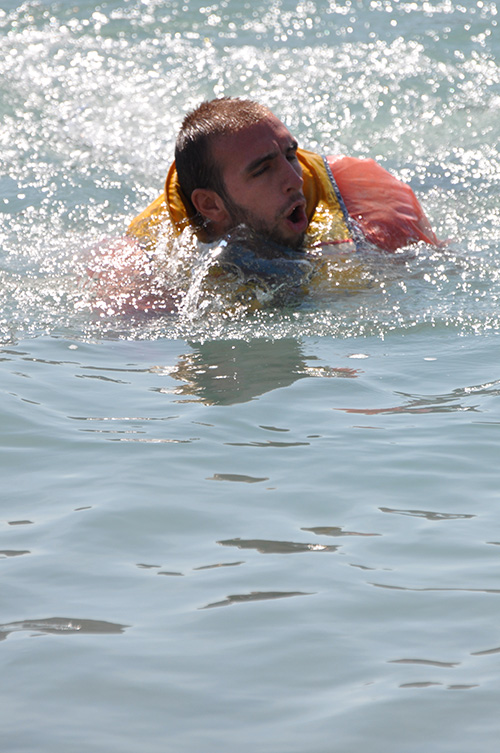 Down at the river we snapped a few photos and were offered a quick swim if we wanted. The one British guy on the trip, James, actually jumped in and confirmed what the guide said about the cold water. As James recovered, the guides finished preparing the rafts for departure, and we set off. The first part of the trip is pretty much a float, and our guide Ben spent about 30 minutes training us on everything from how to hold and use a paddle properly to how to go down the river safely if we “fell” out of the raft. Actually he said we would not fall out of the raft—if we were to leave the raft, it would be because we were violently ejected. He continued to give us tips as we reached our first grade 2 rapid which was little more than a bumpy ride.

The river began to pick up a bit of pace at this point and we headed into our first grade 3+ rapid. We dove in, the raft bumped and bucked, water flew up all around, this felt like rafting and everyone had a smile on. For the next 30 minutes we alternated between smashing through small rapids and cruising along the river walls. All the while Ben injected little bits of information about the impending grade 5s that were approaching. Before we dropped into the first grade 5, Pencil Sharpener, Ben guided the raft over to the side and we all got out to watch the other guide boat go down first. We watched as the guide boat expertly navigated the drop into Pencil Sharpener, swished through the white water, and came to a stop on the bank below in place to take pictures and deploy a safety line in case any of us went swimming. 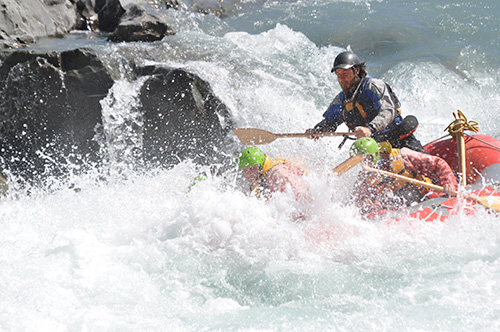 Now it was our turn. We re-boarded our raft, Ben gave the word to paddle, and off we went. The bow dropped over the edge and the two forward paddlers, James and Jason #2, disappeared right in front of Lara and I but quickly reappeared as the raft popped back up and then shot out the back of the rapid. Ben called for “full paddle” and we all dug in to escape the back pull, called recirculation, that tries to suck the boat back into the rapid. Later we were told we narrowly escaped the recirculation and going for a second ride which would have likely capsized the raft. Ignorance is bliss and we blasted down the next 40 meters of white water before pausing in a calmer section to allow the other guide boat to catch up.

We bounced through a few more smaller sections of rapids, which culminate in the massive 400-meter grade 5 section called The Pinch. As we approached The Pinch, Ben again pulled our raft to the side, and we all got out to watch the other guide boat go first, allowing them to get into photo and rescue positions. Ben gave us one last safety tip about trying to float feet first down river keeping ones legs closed if flung from the raft in The Pinch…something about legs making better shock absorbers than the neck, and keeping legs closed lest we never have children. Then he said, “Try to swim left. If you swim left, it’s shitty, but it’s more shitty on the right.” Without much time to contemplate the last statement, off we went. 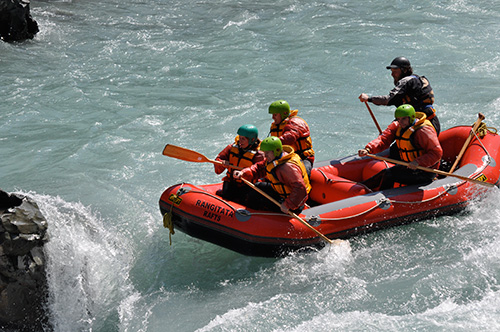 This time Lara and I took the front two positions in the raft. James and Jason #2 took the middle. Ben gave the “full paddle” command, and into The Pinch we went. From this point on it’s mostly a blur. We alternated between paddling hard to avoid the dreaded recirculation and holding on for dear life, but eventually paddled, bumped, and bounced our way successfully to the bottom of The Pinch. I think my face was frozen in a smile, perhaps quite literally given the temperature of the water and the massive soaking it had just received. 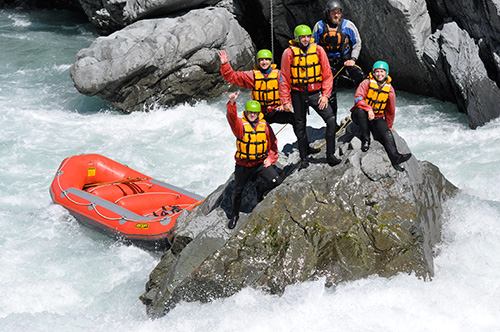 We used a back-flowing current and some hard paddling to reach a giant rock that’s in the middle of the river at the bottom of The Pinch and climbed aboard for a victory photo and to again wait for the other guide boat to catch back up.

Once we re-boarded the raft, Ben informed us that we were welcome to jump in and float the next section if we wanted to. Being totally soaked already and full of adrenaline, we all jumped in and floated down, feet first and legs closed. We floated for about 150 meters laughing all the way, but the water was so cold that by the end I think we all had numb appendages. It’s a bit scary to realize how much danger water that cold really presents. After a few minutes it literally got harder to breathe. We quickly hopped back up in the raft to shake off the cold and headed on to the cliff jumping section of our tour.

There are two cliffs near the end of trip that guests are allowed to jump off at their own discretion. The first cliff is only about 4 meters and is a required first jump before leaping from the larger 10-meter cliff. All four of us jumped from the lower cliff, but only Lara and James jumped from the higher second cliff. We were informed a girl had broken her back jumping off the higher cliff last year, so given my back history, I elected to stay in the raft as a spectator while James and Lara leapt. After the cliff jumping, it’s a leisurely 30-minute float down the river to the pickup point and a quick ride in the van back to the lodge and hot showers. After warming up and drying off, we were treated to an early dinner BBQ before the ride back to Christchurch.

The day was a total success and I’m totally hooked on rafting. I can’t believe I’ve waited so many years to try this. If you haven’t been, book a trip now it’s SOOOOO much fun!

Tussock took some great photos, and all the photos from the day are posted on our photo site.